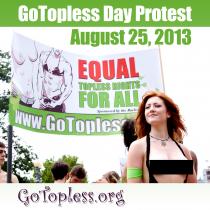 “Gender topless discrimination still abounds worldwide,” said Nadine Gary, president of GoTopless, a women’s organization fighting for equal topless rights on the basis of gender equality under the 14th Amendment of the U.S. Constitution. “Women must have the same legal right to go without a top that men do!”

She said GoTopless will hold its 6th annual topless civil rights demonstrations on August 25. “We’ll be out in force this year, with events in about 30 U.S. cities,” Gary said.

Gotopless was launched by international spiritual leader Rael in 2007 after topless activist Phoenix Feeley won a lawsuit against New York City and was awarded $29,000 in damages.

“New York law allows female toplessless, so after the police wrongfully arrested her for going topless, Phoenix sued and won,” Gary explained, adding that on the issue of public toplessness, the mindset of both the public and the authorities has lagged behind legislative remedies.

“In 1992, the New York Supreme Court applied the constitutional principle of gender equality and ruled in favor of women’s topless rights. Yet in New Jersey, as in most U.S. states and many other countries, this kind of gender discrimination is still rampant.
Just 2 weeks ago, Phoenix Feeley spent 9 days in a New Jersey jail for refusing to pay fines assessed for going topless at the beach. That’s ironic, because back in 1935, on an Atlantic City beach in the same state, 42 men who dared to go topless were fined $82 each for indecent exposure. The very next year, topless restrictions in New Jersey were lifted for men. The time for women to have the same right is long overdue. As Rael puts it, as long as men are allowed to be topless in public, either women should have the same constitutional right or men should also have to wear something to cover their chests!”

What could spur change?

“We need an influential woman to exercise her topless right in public!" Gary exclaimed. “Lady Gaga will be in Brooklyn for the Video Music Awards on GoTopless Day. If she were to go topless there, it would empower other women to ‘free their breasts and free their minds,’ as our GoTopless motto says.”

For participating cities and events, see the “Boob Map” at: [link]