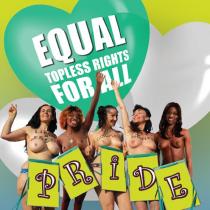 Back
Tweet
LAS VEGAS, August 20 - The women's rights organization GoTopless will hold Go Topless Pride Parades and other events in over 60 cities worldwide for its 7th annual GoTopless Day,August 24, according to a statement released today by GoTopless.

“Equal topless rights for women is a constitutional right,” said Rachel Jessee, New York City’s GoTopless leader. “The 14th Amendment of the U.S. Constitution specifies equal rights for everyone. That includes the right to expose body parts common to both genders, including the chest and nipples."

The states of New York, Texas and North Carolina are a few states that already honor the Constitution but many cities in those states have passed unconstitutional ordinances to prevent women from going sans shirt.

GoTopless’s goal is “to eliminate the current double standard,” Jessee said. “If women can’t go topless, the only way to ensure equality is to make men cover their chests too, as spiritual leader Rael declared when he inspired GoTopless in 2007.”

Jessee pointed out that before 1936, people thought it indecent for men to go bare-chested in public.

“Women's ankles, knees and belly buttons were taboo back then, but today nobody bats an eye,” Jessee said. “Why should showing breasts be different?”

She emphasized that GoTopless members don’t bare their breasts to attract attention.

“Showing female breasts should be a natural part of life, a non-event,” Jessee said. “The right to go topless is immensely empowering for women after centuries of living under macho laws and puritanical Judeo-Christian values.”

Living under such constraints is debilitating to a woman’s self-esteem and body image, Jessee said.

"At our events, we invite all women to celebrate their bodies and femininity,” Jessee explained. "Women are life bearers! How can their breasts and nipples be considered indecent?”

The idea that bare female breasts pose a threat to society or to children is absurd, she said.

“Children are nurtured by breasts,” she pointed out. “Showing those breasts is a powerful way to emphasize women’s nurturing role in our ailing world.”

As a member of the Raelian Movement, Jessee follows an atheistic, creationist philosophy.

“Raelianism encourages me to embrace my nudity,” she said. “The body is a masterpiece, engineered in the image of our creators, the Elohim. Guilt and shame aren’t part of my value system and shouldn't be part of anyone else’s. The shaming of women and girls violates human rights and should be illegal.”