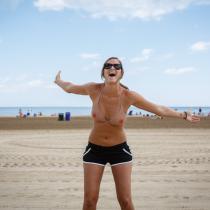 Back
Tweet
Tata Tops to cover chests of GoTopless participants in Venice, Calif., event on Aug. 24

LAS VEGAS, AUG. 22 – Venice, Calif., is about to witness its seventh annual GoTopless event in honor of Women's Equality Day on Sunday, August 24, according to a statement released today by GoTopless.

“In this city, as in most places around the world, women still can’t lawfully go bare-chested, although their male counterparts have had that privilege for decades,” said Lara Terstenjak, Los Angeles leader of GoTopless. “It’s time to celebrate women's topless pride in spite of all the silly and unconstitutional restrictions posed by local laws.”

She said the creators of Tata Top Bikinis, Michelle Lytle and Robyn Graves, offered to provide “breast look-alike bikini tops” specifically for the Venice GoTopless event, and that GoTopless accepted the offer with gratitude.

“By wearing Tata Tops, we’ll demonstrate just how incredibly ridiculous the current law is,” Terstenjak explained. “Women can legally wear bikini tops painted to look exactly like real breasts, but they can’t show their own!”

Taking the point a bit further, she added:

"Imagine if, 100 years ago, women had worn pants with lifelike knees painted on them. Many people in 2014 don’t know it, but women’s knees were considered too indecent to show back then. Today, no one bats an eye at the sight of an uncovered woman's knee. Soon it will be the same for bare breasts! How silly it is to have to wear painted ones!

She said the Venice GoTopless event will kick off at 2 p.m. with a “silent sit-in” on the beach near Boardwalk and Navy.

“At the sit-in, men will be invited to wear Tata Tops along with the women to show their support for equal topless rights,” Terstenjak said. They’ll be saying, ‘Either we all can go topless or no one can!’”

After the sit-in, the group will “joyfully make its way down the boardwalk toward Windward Circle,” according to Terstenjak.

“Our intent is to raise public awareness of Gender Topless Equality and the importance of abolishing all gender discrimination,” she said. “Women's self-esteem and empowerment depend on eliminating such discrimination in all its forms, once and for all!”