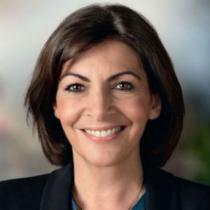 First, allow me to congratulate you on your election as Mayor of the city of Paris. It is with great pleasure and interest that I noted your desire to make your city a "place of freedom, equality and parity."

My name is Maryline Canin and I am France’s representative for the activist and non-violent organization, "GoTopless."
Gotopless, an independent non-profit organization based in the United States, was established in 2007 under the guidance of spiritual leader, Rael, in order to promote gender equality. It is based on a simple premise: Wherever men are granted the right to be shirtless, women should have the same right to be topless, in the name of equality among all human beings. The Topless protests and demonstrations organized on International GoTopless Day that have taken place over the years have quickly gained a lot of support and, today, the event draws thousands of people each year on the Sunday closest to August 26. In fact, this year we will celebrate the 7th year anniversary of the event and "GoTopless Pride" parades are organized in over 60 cities worldwide.

In France, our first event was held in Paris in 2011 and it was obvious then that equality between women and men was nothing but an illusion in the Parisian capital.
That year, even before the approved protest begun, all six of the women who were still wearing their clothes and were getting ready to participate, were arrested, taken to the police station, and their right to freedom of movement and expression was literally taken away from them. Two hours later, they were released from the station and as they tried to reunite with the group they were unexpectedly surrounded once again by a callous police that acted gratuitously and whose sole intent was to prevent them from joining the rest of the group at the end of the march.

During our seven years of peaceful protests around the world, it is in Paris that we had the most misogynistic and disrespectful experience accompanied with unnecessary use of police force. In fact, complaints have been filed for false arrest, discrimination, and for restricting our freedom of movement and expression.

Equality between women and men must be applied in both the private and public sectors. And the projects you have outlined emphasize this. Your political resolve is undeniable and I would like to appeal to your sense of justice and equality by granting Parisian women the freedom to walk around topless in all public places where men are given this right.

It is currently not the case at the beach (Paris Plage) or at municipal pools where many signs warn Parisians to "not forget to wear their top and bottom" (see attached photo). Other municipal instructions threaten women with a fine of 38 euros if they wear anything indecent which includes going topless.

Is it right to invoke indecency simply to avoid addressing the laws that deal with gender equality? Women's legs were once considered indecent in public, as was women’s vote! But gender equality has always prevailed.

We call for a true equality on our rights, one that respects the right for women to expose their breasts as men do. This is a fundamental right and no authority should have the right to dictate how women should behave or decide for them how they should dress, on the pretext that exposing their breasts would be indecent.
This change is unavoidable. We need only look at celebrities such as Miley Cyrus or Rihanna who often expose themselves topless, or at fashion shows that highlight women's breasts, or at women who protest topless and seek gender equality around the world (I’m thinking about China!), or at women who travel around the world topless and post photos of their bare back on social networks to elude censorship (see attached pictures).

The New York community has already figured this out and, for many years now, has authorized women to be topless in public and requested that officers respect this right and not harass topless women on the streets. New York has dared. Why not Paris?

And for those who fear that such an event is an opportunity for men to show up in large groups, one needs not worry. Less than one hundred years ago, when men were allowed to go shirtless in public did women rush to see them? Not so. Then why should we assume that men would not be equally reasonable?
And even if there was an influx of men, all we need to do is remind ourselves of how Israeli Prime Minister, Golda Meir, reacted after a wave of rape incidents stormed her country. While the popular demand was to impose a curfew on women, her response was: "This is a problem that involves men, therefore, men are the ones who should be locked up."

This year, our national event will be held in Lyon, on Sunday, Aug. 24. In addition to requesting a right, we have added a festive and awareness-raising feature by launching a “GoTopless Pride” parade celebrating the Pride of being a Woman and Pride of our nude breasts, just like the Gay Pride. If you recall, this Gay Pride March was made possible thanks to the relentless efforts of a minority that wanted to defend homosexuals’ rights.

In 2015, we plan on organizing a “GoTopless Pride” parade in the capital. With my American experience, I would be happy to discuss the preparations with you and the positive impact that such an event would have on the French capital. Should you agree to meet, I am available at your earliest convenience.

I hope that my letter will have caught your feminine and humanitarian attention as well as your sincere desire to work for the respect of gender equality. This project is everyone's business if we want true female and male equality to finally become a palpable reality.