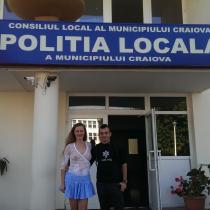 Back
Tweet
Below is the recount by Toma Cristian Marinescu, GoTopless leader for Romania of the wrongful arrest of GoTopless Day participants in Craiova.

We went at the Mayor of Craiova on Wednesday, to ask for the authorization to demonstrate for GoTopless Day. On Thursday they said they would call me Friday to let me know their decision.

I made sure to also ask them what alternative they offered in the case that our request was turned down. Their answers was : "if we don’t receive the authorization to demonstrate, you can still hold up banners in our hands, but YOU CAN NOT give flyers to the people; except if people come to you to ask for more information"

It is exactly what we did, respecting the authorities demand. We showed up and no one gave out any flyer and in fact, the police was already there, waiting to stop us before we could do anything.

On Friday I didn’t receive any answer but the Mayor's office had sent notice to the police saying that they didn’t approve of the protest. The police showed us the notice as soon as we arrived in the park. They explained that we did not have the right to protest because another activity was already taking place there. (which was not true!)

The police spoke about Law Statue 61 which bans obscene behavior in public and that is what they used to arrest us though we were NOT going topless. They said this law was applicable because the boys (including myself) were wearing bras to support women's topless cause and the girls were wearing see-through shirts.

Anyway, the Police force present was actually the Local Police (they are paid by the Mayor), and they were waiting for us with 2 police cars sent there especially for us, of course!

After speaking with them for a few minutes and trying to explain to them that we were not doing anything illegal, they decided to take us to the Local Police Station, where they kept us for about 2 hours, and gave us each a $130 ticket……one of the girls signed the citation….the rest of us did not.

The citation stated that we were topless while none of us was. They also wrote that we had a protest, which we did not. One of the girls was French and doesn't understand Romanian. So, when she refused to sign the citation in an unknown language and asked to be put in touch with the French embassy, the police officer took me aside in the hallway and said to keep it simple and not to mention the French girl in the arrest. The French girl refused. The confirmation of the citation with the fine should arrive in 2 weeks they said.
We have pictures taken in the park to prove we were not topless as well as a video from when we arrived showing the police was there and we did not even had time to do any protest!