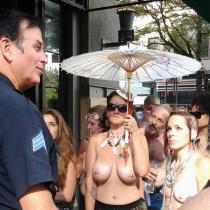 Back
Tweet
By Matthew Wilson
GoTopless Day falls on the Sunday closest to the anniversary of women winning the right to vote in America. Events are held in order to promote topless equality. Events occur in multiple cities across the USA, so we decided to independently hold one of our own here in Denver.

We all met and lounged a bit in Denver's Civic Center Park. Eventually we grew to around 12 women and 8 men, enjoying mutual respect and appreciation without objectification. Some of the men even wore bodypainted or actual bikini tops to show their solidarity. One of the guys, upon realizing how uncomfortable the tops were, painted "This Thing Sucks!" beneath his top.

There was a bicycling event going on, highly publicized, so it was very populated. Though we exhibited no lewd or sexual behavior, we obviously weren't surprised that it didn't take long for law enforcement to appear and inquire about our purposes.

We were very peaceful and explained about GoTopless Day and related how Colorado has no state law against female toplessness, and that we weren't breaking any local ordinances. Soon, a member of the police department who claimed to be a public relations liaison appeared. He expressed some moral condemnation but admitted that there were no laws against female toplessness in Denver. He did state that the bicycle event was held by permit for the day, and that if the organizers complained, we'd be asked to leave.

We walked the area for about an hour, receiving many startled looks but an amazing amount of appreciation from attendees (and not just because of "Wow, Boobs!"). Many men and women told us they felt the taboo against topless women was unfair. Though many women expressed how they wished they could join us, eventually (as expected), complaints were made to the organizers and forwarded to the officers, so we left peacefully and went for a walk down the 16th Street Mall.

The 16th Street Mall is always one of the busiest sections of Denver, full of locals and tourists; today was no exception. Smiling and waving, allowing photo opportunities when requested of us, we made quite a favorable impression on onlookers; we received many cheers and comments of support. Members of the public (including females) stripped off their tops and joined our stroll.

A female police officer walking her beat noticed us and asked the women to cover up. We politely related how we'd been assured by previous officers that we weren't breaking any of Denver's local ordinances. The officer said she'd recently been to a Vice class where she'd learned that it was illegal. She was at the end of her shift, so she called backup and handed it over to them.

Since a crowd was forming at that point, many officers arrived on site. A very amicable officer became the primary. He also was convinced that we were in error, and he said that if the ladies didn't cover up, they'd be ticketed. We knew our right to be informed of what laws we were to be cited under, so we politely asked him for the statute number.

He agreed to find out for us. He made multiple phone calls, including to the original lady officer, but nobody could tell him the statute. Eventually, he received confirmation that no laws were being broken. We cheered and went on our way. All in all, it was a wonderful experience!

We know that we'll possibly receive some ridicule in the news media, but also hope that our appearance initiates a deeper conversation. It took much courage for those in our group to make such a public statement. We know the taboos; we understood that there'd be those who'd choose shallow thinking over depth and react in juvenile manners. We braved objectification and condemnation, knowing that men once faced the very same thing when male toplessness was illegal in the US years ago.

Times are changing. It's the hiding of women's breasts that make them a "forbidden fruit". More and more cities across our nation are embracing equality, where female toplessness is accepted in the same situations and contexts as men's. Eventually, we'll actually achieve the equality that America proudly boasts.