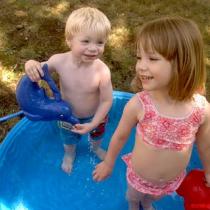 Back
Tweet
MONTREAL, Sept 2 – Days after the 7th annual GoTopless Day raised public awareness of equal topless rights, a lifeguard at a Montreal, Canada public pool ordered a 3-year old girl to wear a top. If she didn’t comply, he said, the toddler and her mother, Veronique Shapiro, would have to leave immediately.

“I’m shocked,” said Sylvie Chabot, Raelian guide and spokesperson for GoTopless-Canada. “The lifeguard’s reprimanding order was discriminatory and reprehensible. It will affect this child for the rest of her life!"

“It’s the equivalent of imposing a burka on her,” Chabot said. “Were topless toddler boys at the pool told to cover their chests?” Of course not!”

Chabot reflected that this 3-year old had absorbed a painful lesson: that her chest must be hidden because it’s somehow shameful.

“Yet a boy’s chest, which looks absolutely identical at that age, isn’t considered shameful at all,” Chabot said. “What an outrageous double standard! The imprint of this shaming experience will have devastating consequences for the girl’s body image and feeling of self-worth.”

She added that boys’ minds were also impacted by the pool incident.

“They saw a girl forced to cover up on top and realized the directive didn’t apply to them,” she explained. “They naturally concluded that the male gender is privileged and superior to females. What’s more, topless gender discrimination fosters an obsession with the forbidden female chest that might trigger violent, unbalanced sexual behavior later in life.”

“Free your breasts, free your mind,” is GoTopless’s motto.

“Prevention of pedophilia is often mentioned as a reason for forcing girls to hide their chests,” Chabot said. “But it’s outrageous to use the behavior of a few sick people to justify topless discrimination. Remember, pedophilia also occurs against boys. It’s a crime that must be punished, but everyone is still entitled to equal gender rights.”

Chabot said GoTopless is asking former Canadian First Lady Margaret Trudeau and psychologist Catherine Pinhas Mulcair, wife of Canadian Opposition leader Tom Mulcair, for their support.
“We wrote to them, urging them to pressure the Harper government to ensure that the Canadian Constitution is upheld regarding women’s rights,” Chabot said.