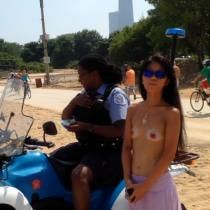 GoTopless, founded in 2007, claims equal gender topless rights for men and women, reflecting the words of GoTopless founder and international spiritual leader Rael:"As long as men are allowed to go topless in public, women should either have that same constitutional right or men should be forced to wear something to hide their chests."

"When presented with Exhibit A, two pictures of Sonoko's chest, she immediately recognized the civil rights issue involved. One picture showed Sonoko's chest with her nipples covered by opaque paint. It was taken the day police issued the citation at North Lake Shore Beach on GoTopless Day, August 24. After looking at it, the judge said she found the municipal law's reference to 'opacity' to be vague, and that if the paint Sonoko used were to cover a book or newspaper page, you wouldn't be able to see the print.

"She explained that by finding her liable, Sonoko could take this matter up to a higher court and argue the constitutionality of the ordinance and municipal code," Gary explained. "She said she would indeed find her liable because she thought Sonoko should take it further. In fact, she said the municipal law's vague reference to opacity [regarding the covering of women's nipples in public] is a very interesting question. She said she's curious to see what will happen with this case, especially if it gets to a Superior Court after being in her courtroom."

Sonoko was given 30 days to appeal.

"We're looking for a civil rights lawyer to represent her in this gender equality case," Gary said. "We recently received our charitable 501c3 status from the IRS and we're organizing fundraising events for Sonoko's legal expenses."