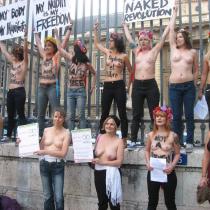 Back
Tweet
On Sunday, Oct. 26, 2014, five GoTopless members joined forces with the FEMEN association in France to support two Femen members accused of sexual exhibition for protesting topless in the French capital.

"Would men in a similar protest, and shirtless, also have been charged with sexual exhibitionism?” wondered Maryline Canin, GoTopless leader in France.

We will recall on GoTopless day three years ago in France, the alleged country of human rights, six GoTopless women who were still fully clothed were arrested and prevented from engaging in the peaceful protest, while men who were shirtless and part of the group were free to protest.

This past Sunday Maryline Canin was with the Femen group and this is what she witnessed: 35 Femen women with flower wreaths in their hair as a symbol of their femininity and proudly disobedient, with beautiful energy, have shown for two hours their unwavering commitment to change attitudes and laws in France and walked to the courthouse, where their trial was held a few days earlier.

• Topless and free
• I’m a feminist, not an exhibitionist
• A shirtless man is cool, free, and legal. A topless woman is criminal.
• My nudity is my freedom...
• Not a criminal, not a criminal

These were some of their powerful slogans that we chanted with them.

The police force was quick to arrive on the scene and, with a crowd of tourists and many photographers present, they stormed toward women, surrounded them and sometimes dragged them to the ground before taking them in their vans. We have since learned that they were arrested and charged with sexual exhibitionism again!

“As more and more women are claiming their right to be topless on social networks by posting photos of their back and nude breasts, as renown fashion designers reveal female breasts during fashion shows, as women protest topless in front of embassies in France, a country known for its buoyancy and culture, other women are arrested simply because they are topless and because they demand the right to have the freedom to do with their bodies as they see fit. Does this not illustrate how much work still remains to be done (or undone) in our sexual revolution where, even in Western countries, we still point the finger at so many Muslim countries and complain regarding the disparity that exists between the way men are treated versus women?” explains Maryline Canin. And what is even more astonishing and confusing is how various political officials, including the mayor of Paris, on the one hand express support for freedom of expression and freedom of creation, while on the other hand remain completely silent when it comes to defending the real equal rights for women to be topless as men are. Has equality between women and men become a politically correct term in France, the only country where Femen women are accused of sexual exhibitionism? How much longer shall we wait before we see the coming of an open minded elected official, as New York’s mayor, who ordered officers in his police force not to harass topless women in the streets?