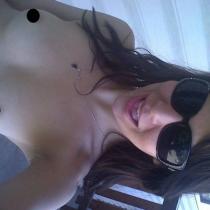 During the weekend of June 14, 2015, Jessica Lehegarate was sunbathing topless on the legally topless public beach of Kelowa, BC, Canada. A police officer walked up to her and told her that he was going to arrest her if she didn't put some clothes on or else she'd have to leave immediately. Jessica rightfully responded that it is legal to go topless in British Columbia. The officer answered that he couldn't charge her but that he could arrest her.

Such situation is outrageous and no woman should put up with such intimidating, discriminatory tactics.  If you are a female who is legally going topless in public, be prepared to educate the police who may stop you by having a copy of your local indecent exposure statute pertaining to female breasts in your belongings.  If the police continues to harrass you and decides to arrest you and it is clear that going topless is your only "crime", then you have the option to politely comply with the arrest (if someone else is filming the sitution, all the better) and then turn back and sue the police and / or the city for wrongful arrest.

In NYC, two notorious topless activists, Phoenix Feeley and Holly Van Voast were both wrongfully arrested in the City while going topless in public. They both sued and received a significant sum of money in damages. If you have the patience and the determination, you are strongly encouraged to do the same wherever topless rights are already recognized.  It seems to be the only way for law inforcement employees to learn to respect women's topless rights. Sometimes it takes a financial "slap on the wrist" before a city learns its lesson.

Now the NYC police is regularly briefed on Women's topless rights in the City but we still advise women to carry that statute if they plan on going topless.  One can never be too cautious.

Thank you, Jessica for bringing this matter to us and allowing us to share with the public.  Each story brings us closer to a true equal gender topless society. Please feel free to share yours with us.