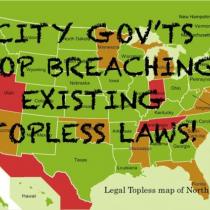 LAS VEGAS, July 6 – “Our organization has been closely following the recent controversy going on in Ontario, Canada, where an 8-year-old girl going topless at a public pool in the town of Guelph was ordered to put her top back on.” said Nadine Gary, spokesperson for GoTopless, a women’s rights organization working toward gender equal topless rights, in a statement released today.

“Ontario is a legally topless province for both genders,” Gary said. “Boys were going topless at this pool, but they weren’t ordered to do otherwise. Only the bare-chested girl was singled out and such a discrimination has to stop.”

“How does a town like Guelph so easily breach a provincial Court ruling establishing topless rights?” Gary asked, adding that the same unconstitutional decisions are also made by cities across the United States.

“Although many U.S. states are now legally top-free for all, city governments still pass ordinances violating the state statutes because repressive organizations and individuals pressure them to do it,” she explained.

Attainment of universal equal-gender topless rights is the primary goal of Gary’s organization.

“Maitreya Rael , spiritual leader of the Raelian Movement, inspired the foundation of GoTopless when saying, ‘As long as men are allowed to go topless in public, women should either have that same constitutional right or men should also have to wear something to hide their chests’ ”, Gary said.

“Rampant repression of female nudity continues to squelch women's equal topless rights in both Canada and the United States,” she said. “We’re seeing court rulings and states statutes trampled to cater to local community bias. This has to stop! What if Americans uncomfortable with racial equality were to pressure cities to bring back segregation and keep black citizens from using public pools? Lawsuits against such cities would immediately be launched, with huge damages awarded. So cities don’t.”

“The city councils of Ashland, Oregon, and Santa Fe, New Mexico, to mention two, wouldn’t think of reinstating segregation laws, but somehow felt justified to ignore existing state statutes by prosecuting female topless-ness,” she said. “We’re saying that’s not OK, and it has to stop!”

GoTopless' annual GoTopless Day is planned on Aug 23 in Guelph and throughout the US, Canada to denounce this violation and to firmly enforce equal gender topless rights. 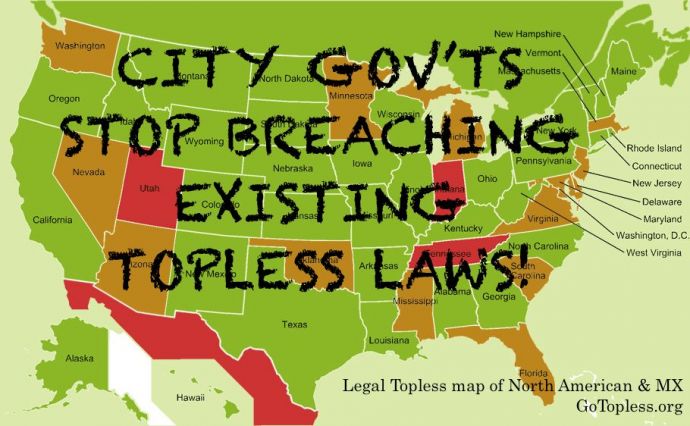