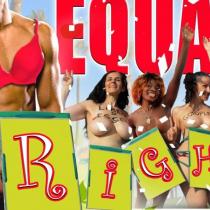 The locations weren’t chosen at random.

“Most of these cities use indecency laws to criminalize women's bare chests in public while those same laws haven’t applied to men for 80 years!” said GoTopless Spokesperson Nadine Gary.

“While it’s theoretically legal for women to go topless in parts of the United States and Canada, many refrain from exercising that right for fear of police intimidation. Some have even been arrested for disturbing the peace."

Gary said several such cases have occurred in New York City over the past few years.

“Women who went topless there have been wrongfully arrested and taken to mental institutions,” she said. “They were later found innocent in court, but they paid a terrible price for doing something they had every right to do without harassment.”

Gary said GoTopless is currently challenging the city of Chicago in court for violating gender equality on GoTopless Day 2014.

“What’s daunting is the backlash from communities that pass unconstitutional ordinances against their own existing topless laws with complete impunity,” she said. “For example, in New Hampshire, State Senator Nancy Stiles is promising to eliminate established topless rights for women in her jurisdiction by 2016.

Gary said Maitreya Rael, spiritual leader of the Raelian Movement, pointed out that women’s topless rights are a matter of gender equality under the U.S. Constitution when he inspired the creation of GoTopless in 2007. “If Ms. Stiles wants to end female topless rights, she has to end men’s topless rights too or be in violation of the constitution,” Gary said.

Her organization’s goal is to establish equal gender topless rights by August 26, 2020, the 100th anniversary of Women's Equality Day.

“Women shouldn’t be persecuted for doing something men have done for decades without any problems,” Gary said. "On August 23, we’ll stand topless with pride, free from sin, guilt, shame and gender inequality. After centuries of repression, women need to be empowered and treated as equals, as the constitution specifies.”