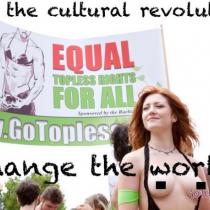 August 2​2, ​ Las Vegas, NV  – On August 28, the women's rights organization GoTopless will hold its 9th annual Go Topless day in the US and around the world triggering a cultural revolution that will change the world according to a statement released today by GoTopless.

GoTopless pride parades and other events will take place in the legally topless cities of New York, Toronto, Vancouver as well as topless discriminatory cities such as Los Angeles, Paris, Berlin, Geneva, and over 60 other cities worldwide.

Maitreya Rael, spiritual leader of the Raelian Movement whose adamant support of gender equality inspired the creation of the GoTopless Movement in 2007 states:  "Muslims are criticized for forcing their women to wear a burqa or a niqab but it is the exact same sexist mindset that forces Western women to wear a top in public".   He adds that hypocritical politicians are quick to support gender equal rights but under no circumstances would they advocate for gender topless equality!".

Rael explains that cultural revolutions are made of small details, contrary to what people think. He continues “The battle for equal topless rights appears insignificant compared to wars,  violence,  or child starvation and yet its achievement will have a direct healing impact on these male-created horrors."

The way GoTopless is changing the world is by pushing societies to give the exact same right to women as they do to men in all areas of their lives without exception, especially the taboo area of topless equality. It’s a blow to the core of male dominance since controlling women’s bodies has always been a leitmotif for that culture.

“Gotopless finally frees women from the body guilt and shame they have been formatted to dutifully endure for centuries.  But it also frees the men from their obsessive behavior over breasts, a direct consequence to discriminatory topless laws” points out Nadine Gary, President of GoTopless.

Rael emphatically states that when women are fully empowered and in power, their caring nature as life bearers will be able to heal the unspeakable mess left in a world exclusively ruled by testosterone.

"It can be said that Equal Gender Topless Rights in the 21st century will empower women as much as equal gender voting rights in the 20th century." says Nadine Gary, President of GoTopless.

Go Topless and change the world!