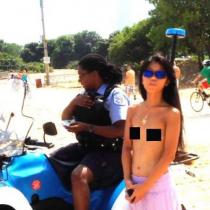 CHICAGO, Nov. 22 – On Nov. 1, a three-judge panel at the Seventh Circuit U.S. Court of Appeals heard oral arguments for equal topless rights in Tagami v. City of Chicago,bringing the legal battle launched by the women’s organization GoTopless just one step away from the U.S. Supreme Court.

“On August 24, 2013, police ticketed GoTopless activist Sonoko Tagami for indecent exposure for appearing bare-chested at an annual GoTopless Day rally at North Lake Beach in Chicago,” said GoTopless President Nadine Gary. “None of the shirtless men present were ticketed for the same behavior, so Tagami sued the city of Chicago for discrimination.”

Attorney Kenneth Flaxman has been defending Tagami’s equal topless rights since the beginning of her legal battle three years ago.

“He’s basing his arguments on the first and fourteenth amendments of the U.S. Constitution,” Gary said. “After he argued the case before the Court of Appeals last week, he reported that one judge seemed to favor equal topless rights while another expressed the view that a woman's body contains more erogenous areas than a man’s, implying that the law shouldn’t ignore established social sensibilities concerning the covering of female breasts.”

The third judge, the only male on the panel, remained silent on the issue, according to Gary. Adding that the panel will render its opinion sometime in the next twelve months, she quoted Flaxman as saying, “If the court upholds the current restriction on topless rights, we will seek further review before the Court of Appeals. And if that is unsuccessful, we will seek further review by the United States Supreme Court.”