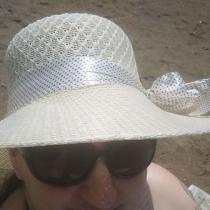 Stephanie Noircent, a breastfeeding mother, was in Camping Les Cedres in St-Jean-sur-Richelieu in Quebec, Canada at around 1:33 pm on June 24, 2017 sunbathing topless at their small beach. She had unfastened her top while laying on her belly and no one was bothering her about it. It’s when she flipped to lay on her back that the hypocrisy began.

“ I was tapped on my foot and I looked up to see three men standing over me. One of them claimed he owned the beach and that I needed to put my top back on. Next to me was my sunbathing boyfriend, so I told the owner, why isn't he telling my boyfriend to put his top back on? He said because he's allowed to be topless and this isn't a naturism beach. I tell him why put my top back on who am I harming. He says there are children here. I say so you're telling me they've never seen breasts before, kids get breastfed you know. He told me, Look we can get into the debate another time but I need you to put your top back on or you will have to leave. I said that it's not illegal and he needs to have everyone else put their shirt back on then and not discriminate. He said no because men are allowed. I asked him, so I have to put my top back on because I'm a woman? He said yes. I asked why. He got impatient and told me that he owns the beach and he makes the rules so I need to put my top back on right now. At this point I didn't want to get arrested so I laid my top across my chest so I'm covered. He walks away and two men remain telling me to "put my top on properly and fasten it" I said why, my breasts are covered. They said that if I don't attach my top they will escort me out of the beach. I ask why and they say they will drag me out. So I fastened it because I felt intimidated and threatened and they said "thank you" and walked away so I immediately left the beach, left the campground, called to make a complaint and get a refund for that day and they said they don't do refunds. They also don't have a complaint department apparently. I complained to their facebook page only to be intimidated, bullied and threatened once again. These people lack basic customer service skills.”

With the guidance of GoTopless.org, Stephanie filed a complaint with the CCLU, as well as the Human Rights Commission of Quebec. “They were so sexist,” Stephanie said. “There was my sunbathing boyfriend right next to me, yet they reprimanded me for being clad the same way, because I am a woman, by their own admission. The excuse oh but the children is outdated and ridiculous. Children are raised and fed on the breast, and see siblings, family members and friends breastfeed as they grow up. Sexism is taught, not born. The only people who took a second glance at me were adults.”

Stephanie is an activist for women’s rights. “I had just went to Ontario a few months ago and went topless in two different cities. I even called the police department to be sure it was legal, and they confirmed that it was. Yet, apparently not everyone has caught on in Quebec.” She says. “If a man can expose his useless nipples to the world but women can’t, who’s breasts actually are made to nourish and sustain human lives, it is clearly a sexist society. No one said anything when I saw many man whip out their penises to urinate in the bushes, even with a bathroom 6 meters from them. So a man can be topless as well as expose his penis, but women have to keep their shirts on? The hypocrisy is strong here,” she stated.