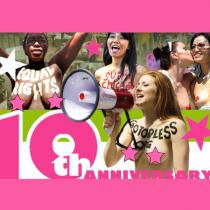 LAS VEGAS, Aug. 22 - While Gotopless event organizers are getting ready for their multiple marches scheduled next Saturday throughout North America and Europe, it is also time to reflect  on their success in fighting for gender topless equality since 2007, inspiring women worldwide to stand up for that right. For each of its 10 years, the organization has held annual GoTopless Day events on August 26 to honor Women's Equality Day commemorating the passing of the 19th Amendment.

“She had been wrongfully arrested for going topless in public,” Gary explained. “It’s been legal for women to go topless in New York State since 1992, so Phoenix sued and won.”

Upon learning of the case, international spiritual leader and gender equality advocate Maitreya Rael initiated GoTopless, saying, “As long as men are allowed to go topless in public, either women should have the same constitutional right or men should also have to wear something to hide their chests.”

Soon after its launch, GoTopless triggered a wave of topless activism in the United States.

“We raised awareness about our constitutional right to equal gender topless equality and challenged the old Judeo-Christian patriarchal values,” said Gary, who is also a Raelian Guide.

33 of the 50 United States are now legally topless for both men and women, and Gary said GoTopless played a role in determining that total.

“Our Tagami vs the City of Chicago legal case, is about to reach the Supreme Court and will finally establish the constitutionality of going topless for females on the basis of gender equality nationwide.”

“A number of U.S. cities, including Los Angeles and Venice Beach, Calif.; Ocean City, Md.; Fort Collins, Co.; and Springfield, Ms., are trying to​ pass or have passed​ unconstitutional ordinance against female toplessness in spite of state laws allowing it,” she pointed out.

GoTopless members and others are challenging the ordinances in court.

Abroad, in Canada, GoTopless forced the government of Ontario, a legally topless province, to modify its legal clause to include beaches and parks previously banned for topless women." remarks Gary

“Judeo-Christian morality seems to take precedent over gender equality in most Western democracies and more than ever, while all kinds of discrimination are roaring, we must continue to relentlessly challenge them in court and with our chest out, at least on August 26”. Gary concludes