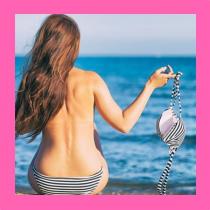 Los Angeles, CA, Aug. 24 - While Gotopless event organizers are getting ready for their multiple marches scheduled next Saturday throughout North America and Europe, the organization's L.A. branch is finalizing its Venice boardwalk parade while hoping to be fully topless by 2020.

For the past 10 years, the organization has held annual GoTopless Day events on August 26 to honor Women's Equality Day commemorating the passing of the 19th Amendment and inspiring women worldwide to stand up for that right.
“We’re working toward freeing women’s nipples and obtaining equal gender topless rights that are enforced worldwide,” said GoTopless’ Spokesperson, Lia Steinman, who leads the organization’s L.A. branch.

She said the Los Angeles GoTopless Day Parade will begin at Navy St./Boardwalk at 1PM with speeches about topless equality and the ERA and conclude on Windward Circle.

Two years ago in April, Venice Neighborhood Council Community Officer Melissa Diner had sponsored a resolution that would allow women equal topless rights on Venice Beach. It was adopted by a 12-2 vote, but still requires county and city approval before it can go into effect. That could take time.

“The Venice Neighborhood Council’s approval is a hopeful step forward after a decade of activism on Venice Beach,” Steinman said. Now it’s time for the city and county to follow up by making equal gender topless rights a priority!”

GoTopless is aiming at the year 2020 for Venice Beach and the whole state of California to finally obtain its legal topless equality statute, just mirroring NY State legally topless since 1992.

Topless advocate, Anni Ma, inspired by Gotopless activism, is suing the city of Los Angele for gender discrimination during her topless arrest last Spring. Her lawyer is very hopeful with the positive legal outcome of this case.

“2020 marks the 100th  anniversary of the 19th  amendment” Steinman said. “In 1920, women earned their right to vote on the basis of gender equality. The same constitutional principle must apply to the female chest, not only the politically-correct areas of a woman’s life.”

The Gotopless case Tagami vs The City of Chicago will reach the U.S. Supreme Court very soon and Ms. Tagami will be co-leading our parade in Venice.

Nadine Gary, leader of the Gotopless Movement, explained that the state of California, several U.S. states, and many countries around the world ban equal topless rights because of archaic patriarchal values widely perpetrated by Abrahamic religions in Western democracies.

“The GoTopless campaign runs much deeper than a little nipple show,” she concluded.  “It rattles an obsolete social system that needs to be overcome for ‘the new human being’ to emerge and a peaceful world along with it.