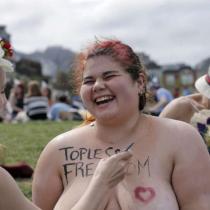 "We wholeheartedly applaud this proposal," said Nadine Gary, President of GoTopless, "we have actively fought for topless equality for the last decade and are delighted to see political figures stand up for this gender equality matter".

Gary remembers that in 2015, councilwoman Melissa Diner of District 11 of the City of Los Angeles had launched a similar proposal for her Venice Beach neighborhood but the Los Angeles City Council  had not acted on it stating more pressing priorities.

"It is quite an oddity to see California react so conservatively on equal gender topless rights when it's been legal in the state of New York for 25 years already!"  remarks Gary. "Let is see how Worthington's proposal fairs, it will be considered by Berkeley's city council meeting on Sept 12."

Gotopless just celebrated its 10th anniversary on Aug. 26, 2017, honoring Women Equality Day with GoTopless events in many cities throughout the Western world, including 40 in the US alone.