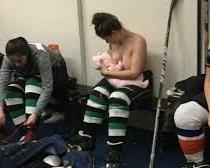 Vancouver, April 19, 2018 – At the end of March, Serah Small, a 24-year-old Alberta hockey player, made National news because she breastfed her baby in the locker room during a hockey tournament in Grand Prairie, Alberta .

“The natural act of nursing one’s young, replicated by every mammal on Earth, somehow created a media frenzy among human mammals as if Aliens had landed on Earth!” remarked Denise Belisle, GoTopless leader in Canada.

“Why would this natural, instinctive behaviour be regarded as an oddity among ‘civilized’ Homo sapiens?” asked Belisle. “Giving a baby a breast to feed on is just as natural and decent as giving an apple to a five-year- old child.”

“The problem in our society is not that women want to breastfeed their babies, but that they want to do it in public and while doing so, exposing their breasts,” Belisle said. “There is so much discrimination toward women and their breasts because our Judeo-Christian values make us perceive the naked body with guilt and shame. That includes the female nipple but strangely not the male nipple.

” Since its inception 11 years ago, GoTopless has alway maintained that “as long as men are allowed to be topless in public, women should have the same constitutional right. Or else, men should have to wear something to hide their chests.”

“That was the claim made by the Spiritual leader, Maitreya Rael, a relentless defender of equal rights when he recommended the creation of GoTopless in 2007,” informs Belisle.

Equal rights is the core of GoTopless’s mission statement because the human nipples must be treated in equality under the law, in Alberta and everywhere in Canada, including Quebec where topless equality is still baffled due to a murky law
legislating the issue in this largely Catholic province.

“All Canadian provinces should seek inspiration from Ontario and British Columbia when it comes to topless equality,” insists Belisle. She concludes: “My hope is that our society finally accepts and recognizes women’s body as equal to men’s and puts equality before so-called Christian morality.”