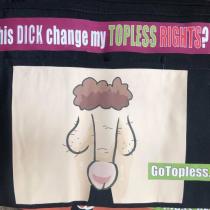 Las Vegas, Aug 21—The women's organization, GoTopless—established in 2007—continues to lead the fight for gender topless equality with its 12th edition of GoTopless Day on Aug 25 in honor of Women’s Equality Day.

“The absurd laws around female nipples point to the lingering bodily repression still inflicted on women by Abrahamic religions in the 21st century. And they are reflected by obsolete, prudish ordinances in our society even today,”  stated Nadine Gary, Raelian Guide and President of GoTopless.

“A law that only criminalizes topless women, but not topless men in public leads to  ‘sexual violence against women’,” Gary said.  She added, “It hypersexualizes women’s chest and creates a predatory reaction in many men."

“Already 35 US states are legally topless on paper, but the law is often not enforced  and many women are concerned about going topless for the fear of being harassed.  Steep fines must be given to men to deter them from doing so," Gary remarked.

Gary believes that in a safe environment, women will recover the confidence to exercise their equal topless rights.

On August 25th, the goal of GoTopless Day in both NYC and Venice Beach is to inspire and empower women.  In NYC, they are invited to exercise their topless right, since it is legal in that state.  In Venice Beach, CA, however, they are encouraged to come and stand up for gender topless equality, which is currently denied in LA County.  The parade in New York City is slated to start at 12:30pm on W58, between 8th and 9th, whereas the parade in Venice Beach, CA, is slated to start at 1pm on Ocean Front Walk @ Park Ave.