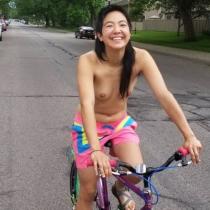 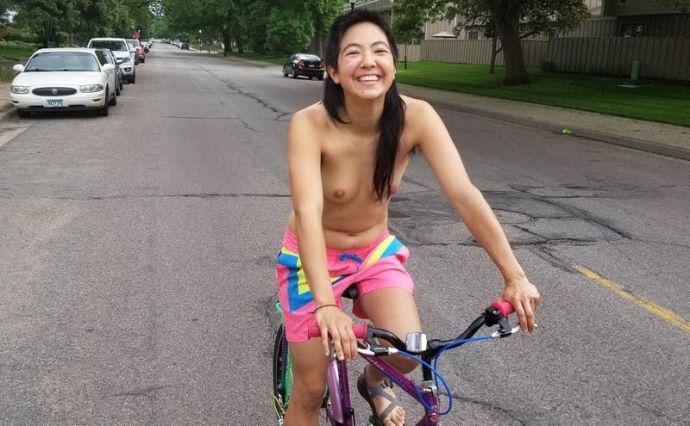 Wednesday, June 17, 2020 by Hannah Jones in News
In early September, 2018, Helena Howard was enjoying a nice evening at Minneapolis' Hidden Beach. It was mostly empty and quiet. She and her partner, Jacob Carrigan, were reading a book aloud while lying down – she on her stomach, Carrigan on their back.

Both of them were topless.

The only reason this day stands out in anyone’s memory is because the Minneapolis Park Patrol wrote a report about it. A pair of officers in uniform were sweeping the beach on foot when they came across Howard and Carrigan.

“I could see that the female’s breasts were exposed, and I could see Howard’s nipple from the side as we were walking up to them,” the report reads. “I did not see any clothing under Howard, or attached to Howard’s top half.”

The officers walked past, turned around, and addressed her.

“When Howard leaned up, I could clearly see Howard’s breasts, areolas, and nipples,” the report says helpfully.

They advised her to cover up and issued her a citation. Minneapolis Park ordinances specify that “no person 10 years of age or older” shall expose their “genitals, pubic area, buttocks, or female breast below the top of the areola” at a public park. Carrigan asked the officers why they could be so sure Howard was a woman, and they declined to answer any questions “unrelated to the explanation of the citation.”

If they had a problem with it, they’d have to take it up in court.

Howard was prepared to do just that, and attorney Jill Brisbois was prepared to help – pro bono. It’s not right or reasonable, Brisbois says, that “certain people get to walk around without their tops on, and other people don’t.”

Even at the state level, people with breasts are allowed to be topless – as long as they are not also being “lewd” or “lascivious.” (Whatever that means.) But the rules are wobbly enough to leave some room for interpretation. In 2017, Rose Picklo got sent to jail for taking her shirt off at a Minnesota United match. The handful of men who’d also done so were not even asked to cover up. Charges were eventually dropped.

Last summer, Michelle Bennett, a Duluth photographer, got the cops called on her for sunbathing topless at Park Point Beach. She wasn’t cited with anything, but it effectiveley ruined her day out.

It turns out, Howard didn’t get her day in court. The case was tossed out pretty quickly after she lawyered up. But, as far as Howard’s concerned, this conversation isn’t over.

“The next summer, I started biking around topless,” she says.

After calling the city attorney to be triply sure she was within her rights to do so, she mounted up, took off her shirt, and went for a ride with a friend. The next time, she went alone. Then she started biking to and from work topless.

For the most part, things were fine. She even got the occasional bout of encouragement from passersby. Sometimes, people would shout, or catcall, or take photos, or point-blank ask her why she was topless. She’d usually give them an honest, straightforward answer.

Biking without a shirt on a summer day feels amazing. And if men are allowed to do it, why can’t she?

Her next step was organizing her first topless bike ride – a gaggle of about 10 riders, including Carrigan. They congregated on the Midtown Greenway, took off their shirts, and had a refreshing ride. Then they met up for ice cream.

Carrigan thinks they heard at least one driver shout “boobies” out the window as the crew zipped by, but other than that, it was just another lovely summer day.

“It felt beautiful and powerful and, ultimately, totally normal,” they say.

The Minneapolis Park Board is currently in the process of reviewing its ordinances, including the one that got Howard in trouble at the beach. After the board has bandwidth to handle anything unrelated to COVID-19 or police brutality, Howard’s hopeful they’ll decide it’s an arbitrary, sexist relic and throw it out. She’s already spoken to her commissioner about it.

In the meantime, she's deciding when she wants to take another group ride. Nothing’s in the works at the moment, but if you’re a woman, trans, nonbinary, femme, or literally anybody who wants to experience what it’s like to take your shirt off on a hot day for the first time, send her a quick email: hmlhoward@gmail.com.