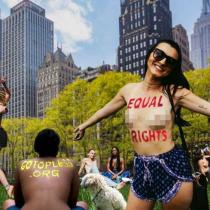 August 17, 2022 -  The international organization, GoTopless, proudly celebrates its 15th annual GoTopless day on Sunday August 21, 2022 with events in the US, Canada and Europe and claims that achieving topless equality will actually change the world.

“During the upcoming Gotopless Day (or any day),  women are urged to take the lead and exercise their topless right wherever it's legal such as in Canada, in the UK, Germany, Spain, Holland, in Colombia, South America or in several US states including New York, celebrating its 30th anniversary of topless equality this year. (People V. Santorelli, 1992).”  says Nadine Gary, Gotopless President and Raelian Guide.

“In places where it is still illegal, women must work up the courage to challenge topless gender discrimination like in Lauzanne, Switzerland this Saturday.  There, Swiss GoTopless activists will stand up against a public pool rule that barrs topless women from swimming or walking topless but oddly tolerates it if they remain seated or lying down! (The rule doesn't apply to men)”,  adds Gary.

In the US, over the last decade, both GoTopless and Free The Nipple advocates have been actively fighting topless gender discrimination through the courts with varying degres of success .  “Sometimes, District Court judges outrageously rule that "the people's sensibility" overrides gender equality (the same argument was once used to legally defend racism) but in one instance the ruling was pronounced in favor of topless equality and 6 western states suddenly embraced topless equality. So far, none of the cases were heard by the US Supreme Court”,  says Gary.

She confides that In Europe and other places around the world, the last couple of decades have seen a trendy wind of repression influencing  the younger generation of women who have  unconsciously begun imitating the American puritanical culture portrayed on popular movie networks and on social media. GoTopless constantly strives to educate women by reminding them that:

“All women who want no discrimination against their gender, who want to see women with the same power as men, need to promote the right to go topless, not as a shy little wish, but as an act of revolution. Women, look the men in the eye and say ‘I have the same right as you and no one will stop me!’   ‘I go topless because I want to change the world!’ “  concludes Rael Maitreya