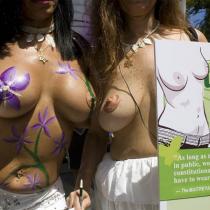 Is it fair for men to be allowed to walk around topless when women aren't?

One group says it's not. They made their statement very clear Sunday afternoon in Miami Beach as many women walked around nearly topless to make their point.

Many women marchers wore pasties to cover their nipples. They were led by the Raelians – the group that believes that scientists from outer space are responsible for human creation on earth. The "Go Topless" march has been held in other cities including Chicago, Portland and New York.

The rally began at 3 p.m. on the corner of Lincoln Road and Washington Avenue. The march headed west to Alton road and ended at Meridian Avenue where many gathered to listen to a speech at 4 p.m.

The group posted the following statement on their website: "Our wish is not only for our breasts to be "tolerated" while laying on the sand, we want to have the same right as men. Their chest is "tolerated" in every public place, why not ours? We dream to be able to walk down Lincoln Rd. with our shirt open and enjoy the breeze on our torso the way some men do on a hot summer afternoon. We want women's bodies to be as free as men's are, that is our constitutional right!"