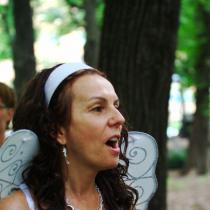 NEW YORK, Aug. 24 (UPI) -- Organizers of a National Go-Topless Day rally in New York said dozens of women bared their breasts and marched in the streets for the right to go topless.

A 1992 ruling by the state Supreme Court made New York the only state where it is legal for a woman to go topless in public. However, the protesters said authorities do not always abide by the 1992 ruling. Artist Jill Coccaro was arrested in 2005 for exposing her breasts on a city street and was held for 12 hours, despite citing the ruling to the arresting officers. Coccaro filed a lawsuit against the city that was settled for $29,000.

"We're all here for the same reason -- to allow women to be free in the park like men," Chabot told the crowd.

Organizers said a petition asking the U.S. Congress to relax nudity laws was circulated at the event and will be presented to legislators on next year's National Go-Topless Day.