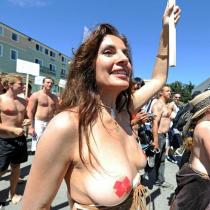 Back
Tweet
Press Release issued by Gotopless.org on July 12, 2010

[[center]b]Gotopless.org to men of Asbury, N.J:
‘Cover your chests in the name of equal rights!’
[/b][
NEW YORK, July 12 – After Asbury, N.J.’s Mayor Ed Johnson ruled on Wednesday that women cannot go topless in Asbury Park, the members of Gotopless.org are demanding that men in Asbury Park also be forced to cover their chests.

“Maitreya Rael is a fervent defender of women's equal rights and has long denounced the unconstitutional double standard concerning toplessness that prompted him to found Gotopless in 2007,” she explained. “In fact, he says men across America should be legally forced to cover their chests since it’s illegal for women to go topless in most states. If men are allowed to go topless, women must also be allowed to do the same!”

Gary said Maitreya Rael has explained that life on Earth is the result of scientific creation by a highly advanced extraterrestrial human civilization, which used genetic engineering to create humans in their image.

“Women's breasts were part of their splendid design and shouldn’t have to be hidden,” Gary said.“Mayor Johnson's ruling is discriminatory and must be overturned, along with a city ordinance passed in January in Ashland, Ore., concerning this same issue. The excuse that families and children may be uncomfortable around topless women mustn’t be considered. That same excuse was used by defenders of the segregation laws 50 years ago, but those laws were abolished nevertheless. Thankfully, the U.S. Constitution isn’t swayed by racism or Puritanism for the benefit of families and children!"

Gary said Gotopless.org will stage topless demonstrations across the nation on Sun., Aug 22, including in Asbury, N.J., “to denounce this gross nationwide discrimination.” She added that all men who participate in the demonstrations will be asked “to stand up for topless equal rights by wearing something that hides their chests.”

“New Jersey is the birthplace of Women's Equal Rights because it’s where Alice Paul began her fight for women’s voting rights 90 years ago,” Gary added. “Our Gotopless protest is therefore being held Aug 22 in honor of Women’s Equality Day.” She explained that although the precise anniversary is Aug. 26, it falls on a weekday. “The rallies will take place on the preceding Sunday so more people can participate,” she said.

The Coaster article July 22, 2010
Asbury Park just can’t shake the topless sunbathing debate.
GoTopless, a U.S. organization that claims women have the same constitutional rights to barechestedness as men (gotopless.org, Not Safe For Work), is planning a “topless demonstration” in the city on August 22. The demonstration would coincide with National Go-Topless Day, an event GoTopless has organized for the last three years. This year’s event will see topless women (and covered men) march through cities such as New York, Chicago, Los Angeles, Seattle, Columbus, Denver and now Asbury Park.
“What the city council has done isn’t constitutional and someone has to stand up to it,” said Nadine Gary, President of GoTopless.org. Recently the Asbury Park city council made it clear they would not consider a topless optional beach in the city.
According to Rael, spiritual leader and founder of gotopless.org, "as long as men can be topless, constitutionally women should have the same right, or men should also be forced to wear something hiding their chest."
The organization is asking men to participate in the August demonstration as well by covering their breasts with bikini tops. Their is also a link on the organization’s website for Nipsies, the official handmade latex nipple pasties of National Go-Topless Day. In order to avoid arrest for indecency, women who demonstrate topless must cover their nipples.
“There are some women in the movement who would like to be in the march but don’t want to risk being arrested, so they cover their nipples with these Nipsies,” said Gary.
“And how ridiculous because they look just like nipples. It just shows you how absurd the law is.”
Gary said the organization is busy looking for a lawyer to represent and defend marchers if need be.
In the past, there have been some arrests, she said. A topless woman was arrested in New York last year on indecency charges and held for 12 hours. She later won a lawsuit against the city, which allows for female toplessness in public.
“This is a shame,” Gary said of Asbury Park’s decision not to allow a topless sunbathing option. “Especially in a symbolic state like New Jersey, because women’s rights started there with Alice Paul.” Paul, a Mount Laurel Twp. native fought successfully for women’s suffrage in the early 1900’s.
“Then it was the right to vote, and essentially today in New Jersey we have a new battle; the right to go topless,” Gary said.
Asked what the demonstration would likely involve, Gary simply said women would be topless and men would be covered.
For solidarity, it’s as important to have the men cover up as the women go topless Gary said.
“We need to make every man on Asbury Park beach cover their tops,” said Gary, who pointed out that men have only been lawfully allowed to go topless since 1936.
Gary, who will be topless at a demonstration in Los Angeles on August 22 (“You have to walk the walk.”), said there will be representatives from the organization in Asbury Park on that day to see things are run properly.
“We’re ready to stand up to whatever comes our way,” she said. “We’re prepared to take this all the way to the Supreme Court if we have to. It’s a civil rights issue. We will be there.”