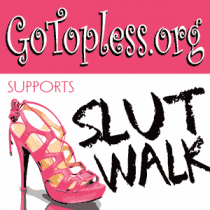 Back
Tweet
The affiliates of GoTopless.org have been closely following the developments of the Slutwalk Movement since its inception and we embrace it 100%! This is how the worldwide Slut Protest began: a Canadian police officer advised women "to avoid dressing as sluts" if they did not want to be harassed.

Our plight for Constitutional equality in topless rights, we are encountering "moral" opposition on the basis that women's breasts in public may arouse sexual desire and therefore must be duly outlawed at all cost! (Of course, what part of the woman's body is not likely to arouse sexual desire, suggesting that a burqa would be the best alternative to barrage all sexual provocation!) This legal battle to go topless in public is "naturally" associated with the plight of "sluts" by repressed minds who have a pathologically distorted view of sexuality, of the human body in general.

And so GoTopless is truly looking forward to joining the Slutwalk Protest where people made peace with the fact that women come with an inherent sensuality ((as men do) that may indeed arouse sexual desire no matter their body shape or type of dress. It is high time to come to terms with the fact that the puritanically branded "slut" is simply a woman, a dignified human being whose sensual human attributes deserve the same praise and respect as her intellectual ones.