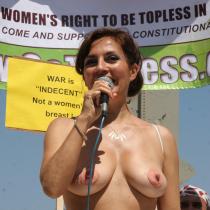 LAS VEGAS, July 23 – When a program code used by Microsoft in one of its programs was recently found to contain a hexadecimal string (0xB16B00B5) too close to the phrase “big boobs” to be coincidence, public complaints by users who detected the combination prompted an apology by Microsoft.

According to the Microsoft statement, the spelling of the offending string will be changed. Meanwhile, a debate has ensued about the possible sexist attitude of the coders who created the suggestive string.

“We’re really appalled at the whole story, which is a good example of why we’ll be going topless in the streets on August 26,” said Nadine Gary, president of GoTopless.org.
“If these men had grown up surrounded by women who were allowed to show their breasts like men do, they wouldn’t be making derogatory comments about female anatomy. We’re not feeling offended by coders who wrote ‘big boobs’ into their code; we’re offended that the phrase is considered offensive when writing ‘big feet’ into it wouldn’t have made it to any forum.Our society really needs to be educated on this subject, so there will be lots of boobs out on August 26 to help make our point clear.”

(To see a complete list of the organization’s scheduled topless marches, check the “boobmap” in our section GoTopless Day.)

“Our GoTopless marches have attracted a lot of support over the last few years, along with a few complaints, mainly from conservative religious groups,” Gary said, adding that some of the criticism is somewhat humorous.

“The funniest opponents we’ve had so far are in Asheville, North Carolina, where a local politician created the association ‘GoBrainless’ to counter our GoTopless action,” Gary added. “We find this hilarious, that he is indeed obviously going brainless while we go topless, and his brainlessness shows. We hope our coming appearance in Asheville will help him recover his brains and overcome his boob phobia.”