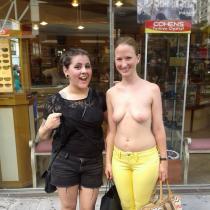 Back
Tweet
Moira Johnston is a calm and poised 29 year old, women's rights activist living in NYC who has been seen walking topless in the streets of NYC these past few months. Moira is within her right because on July 7, 1992, the New York State Supreme Court ruled that it is legal for women to be topless in public in that state.

When asked what inspired her to go topless, Moira replied, "I was practicing yoga at a yoga school in Union Square and I felt like taking off my shirt during class. I didn't do it at first. I actually went to the founder and asked her if it was OK because a lot of my male counterparts practice without a shirt there and in other yoga studios as well. So I practiced yoga topless and a bunch of people complained about it, and so I realized that they didn't know it was legal. That's what inspired me to become more active about letting people know that it's legal."

As she takes her walks while topless, Moira often hears words of encouragement like 'we support you' and 'it's natural'. But to be walking alone topless in the city is not always easy for Moira, "There's a fair amount of diversity in opinions and responses to the issue of toplessness. I notice that when I am wearing a shirt, people look into my eyes and sometimes stare. When I'm not wearing a shirt, people tend to automatically look away from me (unless they are asking for a picture!)".
Indeed, people in society seem to react in a similar fashion each time they are faced with new social norms that temporarily conflict with the morality there were raised with. But, after a period of adaptation, people integrate that new norm and move on.

Moira is a lady with a strong constitution and inner convictions, here is what she shares about her future plans to spread topless awareness:"None of my friends have joined me yet, though we are planning to go out topless together soon!" Moira is right, women who would like to start exercising their topless right in public may want to start in a small group to acquire confidence.
"My future topless plans include swimming pools, yoga classes, and even a topless jog. My main focus at this point is bringing female toplessness to businesses in the state of New York. This includes a variety of public accommodations, such as gyms, dance studios, hotels with swimming pools, spas, outdoor pools, sauna, yoga studios, etc. These spaces where men can go top free, women are legally entitled to as well, in the entire state of New York".

Moira has a point! Though Gotopless Day is only once a year, Women living in topless states have many different outlets that may provide a safe and socially appropriate context", as Moira puts it, to exercise their topless rights besides walking in the street topless. Women are encouraged to "expand into other spaces to suit their lifestyle and needs as they see fit in their own lives" in Moira's words.

"And if a business denies women this topless privilege but allows it for a man, it is sex discrimination and it's a civil rights violation. It is against the law and it is a serious violation" Moira adds.
Moira is a wonderful role model for women because she reacts to the injustice by fighting back, something that many women tend not to do because of their education. But from the nurturing point of view, standing up for one's rights is not only beneficial to our personal freedom and dignity but it also helps build a more civilized and human society.

Moira has this to say about her way of fighting back topless discrimination in NYC: "Any business in violation should be immediately reported to the New York State Division of Human Rights, who will handle the matter with professionalism and expedience. Reporting violations allows the agency to establish equal rights between men and women. The businesses will learn that their governance must apply equally to all people, without discrimination on the grounds of sex. Any woman or man in support of top freedom can spread awareness by informing businesses of the law and being active about reporting violations."

What about the sexual aspect of going topless? Moira confides the following:
"And then there's the idea that it's against the law to be sexy or something. It's OK for women's breasts to be sexual. And for some women, a man's chest can be very sexual as well. And that's OK too. We're sexual. Human beings are sexual. We can be non-sexual. We can be civil. We can act in an appropriate way in a social circumstance. But there's really no escaping the sexuality of humanity, what it is to be human."
Moira is right! Sexuality is an inherent part human nature and it is the reason why we all exist, (even for the Pope :)), as Rael, the founder of GoTopless often says!

Like everything else in life, sexuality has its time and its place. It is the repression of one's body that often causes sexuality to be expressed unnaturally and inappropriately. Going topless is a wonderful way to free one's mind, the mind of women going topless and the minds of those seeing them pass by.