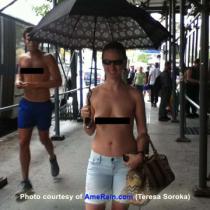 Gary says she complied with those standards: the picture of her otherwise nude torso was edited to conceal her nipples behind big, red Xs.

“But the edited photo somehow still failed to meet the unspoken, stricter limitations on displays of nudity that Facebook imposes,” Gary explained, adding that she posted the photo to highlight an account of Microsoft’s “big boob” code gaffe (See [link]

GoTopless was founded in 2007 by spiritual leader and human rights activist Rael, founder of the International Raelian Movement (see rael.org).

“He founded GoTopless to demand constitutional topless equality,” Gary explained. “His stance is simple: either women can legally go topless or men must be forced to hide their chests.”

She said applying that rule at Facebook would mean that either topless photos of men likewise be banned from the site (which presently bans photos of nude female chests but permits those of men) or that topless photos of women also be allowed.

Gary said GoTopless is organizing rallies in many U.S. cities and in other countries for Women’s Equality Day, Aug. 26.

“These rallies will denounce the unconstitutional, topless inequality of the sexes,” Gary explained. “It’s mostly based on outdated religious morality that still pervades our laws and community standards. Change is way overdue!”

“In Sudan, they’re publicly whipped for wearing trousers, which men freely wear,” Gary pointed out. “But here in the United States, women are criminalized for going topless, while men are allowed to. These two situations violate the same principle of gender equality!”

“Our Constitution guarantees gender equality and we’re determined to fight for it at every level,” Gary said. “Private companies like Facebook aren’t above the law and they must comply.”