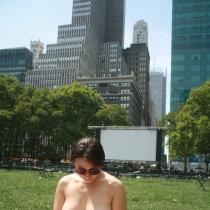 Back
Tweet
Since the 1992 topless law took effect in NYC, women have began to integrate their newly found right in their daily lives. Such women include the Outdoor Co-ed Topless Pulp Fiction Appreciation Society that was formed on August 17, 2011.

GoTopless.org contacted one of the members, whose name is A.A., and to ask her about their topless book reading practice in public:

GT: While reading books in public and occasionally answering questions from curious bystanders, do you feel that the group is bringing education and awareness? That it serves as a springboard for other groups to follow?

A.A.: We don't see ourselves primarily as activists -- we're women (and the occasional supportive guy) who want to enjoy a pleasant afternoon in the sun. We have every right to do it and shouldn't allow fearful or ignorant or small minded people to dissuade us.

If our exercising our rights in this way inspires anyone else to exercise theirs, we're delighted.
Last week, a group of us went topless in Central Park and noticed a woman nearby with her boyfriend happily take her top off too when she saw us doing it. That's education, yes; it's awareness; and it's an example of others following our lead. But the truth is we'd be equally happy doing what we do even if no one followed us.
There's safety in numbers and pleasure in discovering like-minded souls, but ultimately we're each responsible for our own pleasure -- our own pursuit of happiness, if you will. There's nothing wrong with being an activist and wanting to change the world, but there's also nothing wrong with simply relaxing in the sun without an agenda if that's what you prefer.

The Outdoor Co-ed Topless Pulp Fiction Appreciation Society is a great example of women who have incorporated their topless rights into their daily lives and hobbies. By doing so, they are naturally influencing the rest of society to shed their taboos over nudity. That is how topless rights will slowly become a seamless part of society in the same manner as racial equality, gay rights, etc..

The 3 to 15 women group have been seen in front of the New York Metropolitan Museum of Art, at Madison Square the elevated Highline Park, Central Park, Battery Park esplanade, the tables outside the Flatiron Building, the front steps of the New York Public Library, Washington Square park and Bryant Park.

Bryant happens to be the meeting place of the GoTopless Day in NYC on Aug 26 at 12:30 PM. Maybe the topless book lover group will decide to meet there that day and see the gotopless participants off as they march on to Times Square.