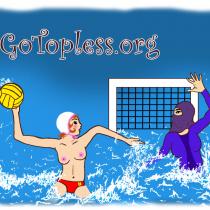 “Meanwhile, the international community is up in arms over some female athletes wearing a hijab that’s not required of their male counterparts,” said Nadine Gary, president of GoTopless, in a statement released by the organization this morning.

She was referring to the Olympic committee’s decision to allow Saudi, Brunei and Qatar sportswomen to compete with covered heads.

“We mustn’t forget that a woman’s right to go topless is just as important as permitting her to go out without a head covering,” Gary said. “During the U.S. versus Spain water polo game, one of the players grabbed the bathing suit of her opponent, briefly exposing her breast. Now, nobody thinks twice about seeing a male nipple, but that split second of female nipple exposure made headlines. In fact, there was considerable discussion about how to prevent such ‘wardrobe malfunction’ in the future!”

Gary pointed out that male swimmers and divers can expose their naked chests while females athletes cannot.

“Still, the Western world had the nerve to cry foul about gender inequality when some of the women were forced by their home nations to wear a hijab at the games,” Gary said. “We need to acknowledge that the West also imposes a form of hijab on women when they are legally forced to cover their chests in public, and that it is a harshly punished criminal act for women to go bare-breasted, whether in Europe, the United States, Canada, Australia, or South America! This form of gender discrimination also stems from a male-dominated religion, just a different one. A law banning female toplessness is clearly unconstitutional unless toplessness is also banned for men. Gender equality at the Olympic Games as well as in everyday life means ‘all or none’ and nothing in between!”

“Traditional religions are the main source of human rights abuse,” Gary said. “And that’s especially true for women’s rights violations around the world.”

She added that GoTopless is organizing GoTopless Day rallies throughout the world on August 26 to protest against gender topless inequality.

“Taking part in these rallies is an ideal way to honor Women Equality Day, which is also celebrated on August 26,” Gary said.