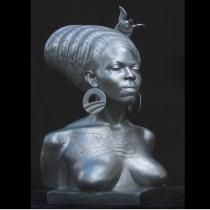 GoTopless contacted the artist to ask him about this artwork currently displayed at the American National Gallery of Art in NYC because to GoTopless women, it trancends in different ways  women’s struggle for topless equal rights.

Indeed, the First Lady of the United States is represented topless and free, empowered and dignified.  She also embodies the way her women ancestors must have proudly appeared before the religion of the colonizer covered them with shame.

GT: Why were you inspired to represent the First Lady in her African ethnicity?
I wanted to make the example of Michelle Obama embracing her ethnicity, because I didn't think that it would ever happen in any visible, superficial way. I wanted to make the statement that she brings a new look to the Whitehouse, and that it is a historical event, and for the sake of of future scrutinization, she should not appear to be downplaying her ethnicity by courting comparisons to Jackie Kennedy just to appeal to white voters. Michelle Obama is the first example of a new era.

GT: Why did you sculpt the American Flag on her bosom?
The flag tattoo on Michelle's bosom was a commentary on the criticism Barack Obama was receiving, at that time, about the absence of a flag pin on his lapel. It was as though critics were questioning his commitment to America. The flag had escaped me that it might be perceived as a reference to slave branding, which doesn't change my thought about its original intent. Forcing Barack to wear a flag pin on his lapel (which he did, immediately following the criticism) was a form of branding. I think if it had occurred to me that the tattoo would be considered referential to slavery, I would have avoided it, which would have been a shame, I think.

GT: Why representing her as a nude bust?
The nude depiction of Michelle is a traditional convention of the language of sculpture.

GT: What do you think of the gender-equality National Gotopless Day, from a sculptor's point of view?
From a sculptor's point of view, gender-equality National Gotopless Day is an incredible opportunity to study the female form in a natural way! as a sculptor, I would love to be able to understand the diversity of forms of the breast not confined to the contrived setting of the artist's studio, or the intimate setting of the bedroom, or the sexual artificiality of an airbrushed/photoshopped image from a magazine. As a sculptor, I would love to see the different sizes of breasts, without preferences. I would love to see the effects of age and gravity on the form of the breast, and I would love to know the feeling of appreciation and/or empathy that could come from seeing that. I would like to be able to connect the forms of breasts to real women doing real things; to understand breasts as merely parts of the whole being.