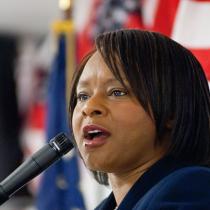 Back
Tweet
Response from Lara Terstenjak of the GoTopless rally to a letter from Asheville City Council members asking the public to stay away from the event:

I once again find myself explaining to you and your fine state the true purpose of our demonstration which you continue to denounce, apparently upon "moral" grounds.

First and foremost, this is a constitutional issue, not a moral issue - and morality is not a constitutional matter. I could imagine that eighty or so years ago, when a small group of men decided they would not wear bathing suits which covered their chest, that this might have been a moral issue. It was, after all, against the law at that time for a man to be topless. But since men won that legal right, women should - and DO have the same right according to the US Constitution.

Similarly, it was considered wrong and immoral for women to vote less than one hundred years ago. But the constitution disagreed and that took priority over "morality" once again. Women finally won a right they deserved all along which was denied them (by men) until women had to create demonstrations, rallies, petitions in order to claim their rights back. It sounds to me that if you and the City Council members were in office at that time, you would have voted to make sure women would still not have the right to vote. It seems ironic that the current Mayor, Vice-Mayor and some members of the City Council are women yet you are against constitutional equality. Of course that means that not only would you not be able to vote 100 years ago, you would certainly not have been considered for your current jobs!

The fact that the City of Asheville is not supporting the GoTopless rally means either you don't understand the constitutional point we are making - which might be the case since you say you will take the matter up with Raleigh in hopes of being able to take away this constitutional right for women, or, you are just covering your political butts so when reelection time comes, you don't get voted out because your opponent will surely claim you allow immoral activity in your fair city. We hope it's the latter reason, Ms. Bellamy because surely you wouldn't be against Constitutional Rights, would you? But then again, since you state in your open letter to Asheville residents that you "do not endorse" this activity, then you apparently "do not endorse" constitutional rights. So maybe you should not be in a political post after all?

Would you be against an NRA rally? Gun rights are a constitutional right as well. Elections are even won or lost on this issue - and might very well be won or lost on the topless issue one day soon.

Maybe worst of all, many women are ashamed to be without a shirt for no other reason than they were raised in a society which sees the woman's body as merely something sexual. Now that is, to me and millions of women, quite immoral! It's exactly that mindset which will change within a generation, Ms. Bellamy, just as it did for the generation which grew up after those brave men decided to remove their shirts at the beach about eighty years ago.

Ms. Bellamy and good City Council members, your North Carolina predecessors voted to keep slavery. What could be more immoral than the buying and selling of human beings? Yet in 2012 you oppose women being topless on moral grounds. North Carolina contributed more soldiers (with gun rights) to the Confederate cause than any other state. I hope you do not continue to make the same relative mistake regarding women's rights.

The change will happen with or without your resistance because it is our constitutional right.