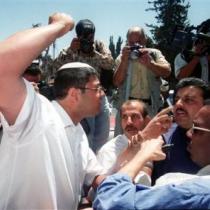 Back
Tweet
On Aug 23, 2012, right wing activist Ben Gvir of Tel Aviv appealed to the attorney general of Israel to prevent GoTopless from obtaining their permit for their protest the next day in Tel Aviv. His opinion was that such behavior [women's top-freedom] hurts the female public and expresses contempt and humiliation of a woman's body. Beyond that, he said it violates laws on public misconduct. He added that it's not a matter of freedom of expression but freedom of degradation.
The permit was released on the condition that female GoTopless participants would fully cover their breasts.

Below is Ms. Haziza's reply.

I would like to comment on the letter you wrote to the Attorney General of Israel and the Police Commissioner of Tel Aviv that I have not personally read but that was quoted in the media. As an Israeli female I don't think you have any notion of what will hurt the female public and what is humiliation and contempt of a woman's body. How can you? You are a male. From the get go your point of view has no merit.

The freedom of Israeli female citizens to go topless legally and equally to men, can never be a behavior that "hurts the female public". What "hurst the female public" is to be discriminated against on the basis of gender!

The only behavior to condemn is the one of men who think they are entitled to judge which rights women should have like their topless rights while they themselves are fully enjoying that privilege. At one point, many men even opposed giving the right for women to vote, thinking that it was best for women not to vote. Who are you, Mr. Ben Gvir to dictate what is best for women?

In Israel, gender equality is protected by the Gender equality act of 1951. In fact Israel is breaking its own law by not allowing women the right to go topless wherever men are legally allowed to.

As a woman, I feel “contempt and humiliation” when you and other men like you, consider my body and the body of my fellow women as your property and when you legislate on what is right and wrong for women! Very similar to many Muslim and Christian men, whose socially established opinion degrades women and keeps women barefoot, pregnant and in the kitchen and without enjoying the same freedoms that men have. Men don't own women's bodies, women do!

Going topless triggers "Contempt and Humiliation of a woman's body" you say? Is it because the exposure of the female breast may spark a sexual thought in a man's mind? Sure it may! The naked chest of a man is also arousing to women! No one finds that "humiliating"! In fact, the sight of the complete human body (male and female) can trigger sexual feelings. Shall we impose the burqa on both male and female Israeli citizens to avoid any sexual thoughts from permeating in our society? If you are going to use this logic you have to go to the end of your thinking.

But, Mr. Ben-Gvir, don't you see that the repression of the female breasts that you advocate in public is precisely what makes men obsess over them! Less than a century ago, men were obsessing over women's legs because they were banned from public view. Today, no one thinks anything when seeing a woman pass by with a short skirt or shorts.

Equal topless rights, as all gender equal rights contribute to making our society more decent and civilized, more respectful of women and their bodies, not the other way around.

Only a perverted mindset thinks that exposing a female breast is more humiliating than exposing a male breast. Female breasts are as beautiful as men’s and they likewise come in all sizes. The only degradation that needs to be observed in the streets of Israel is the degradation of male domination and the unbiased enforcement of gender equal topless rights.