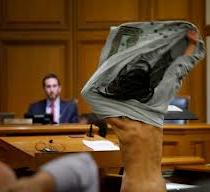 Back
Tweet
A Committee Hearing was held in San Francisco on November 5 to discuss a new ordinance that would put a ban on nudity in the city. The ordinance was submitted last October by Supervisor Scott Wiener, who represents a district in the city and county of San Francisco. The ban would include the Castro district where many nudists congregate.

GoTopless was most delighted to see the reaction of nudist activist Gypsy Taub during the Hearing. She was called to testify and, in the mist of doing so, she bravely took off her dress and stood naked before the Committee while continuing to speaking in defense of nudity until a police officer escorted her out. Please see her heroic action of civil desobedience and listen to her bold statement at http://www.mynakedtruth.tv/

GoTopless applauds her behavior and speech! Breasts are nothing to be ashamed of, nor is the rest of our bodies. In her speech, Gypsy mentions "the sacred of the human body" made in the image of its maker which reflects the views of GoTopless. Human females and males were literally created (scientifically) in the image of their creators (see rael.org). Regardless of our individual spiritualities, shame and guilt of our bodies must completely disappear from our minds and lives if we are to build a society with sustainable human values. This senseless, religion-based guilt must go!!!

A protest against the Nudity Ban on Wednesday, November 14th at 12 noon, at the steps of the City Hall of San Francisco. The protest is clothing-optional.Here is a summary of the facts running up to the above events:

First, under the new proposal, nudity would still be allowed at San Francisco's street fairs, festivals, parades and beaches (which are under federal control). The ordinance is instead targeting an increase in daily occurrences of nudists around the district.

Since California state law does not ban public nudity outright, but only "lewd" public behavior, these rules are left for cities and counties to decide. it is to be noted that San Francisco's parks and port property already ban nudity, but this proposed ordinance would also include public transit, sidewalks, plazas and smaller "parklets."
The proposed ordinance would fine people in the buff up to $100 for a first offense, up to $200 for a second offense within a year, and either a misdemeanor or up to $500 ticket for the third strike.
To pass, the plan has to be approved by a majority of the city's supervisors and signed by San Francisco Mayor Ed Lee.

But not everyone in the city is too happy about banning birthday suits in public.
George Davis, a former nude candidate for mayor in San Francisco, told the Chronicle that he believes the proposed ban is "an attack on freedom."
"I walk all over the place nude," Davis told the Chronicle. "The most common reaction is oblivious."
This is not the first time Wiener has targeted the city's public nudity. Last year, he successfully helped encourage a law that stipulates nudists must place a cloth buffer between their body and any public seat they sit on.
Public nudity bans are already in place in the Bay Area cities of San Jose and Berkeley, California.