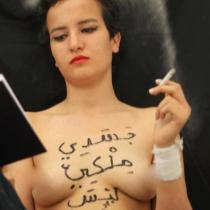 Back
Tweet
On April 4th, there will be GoTopless demonstrations around the world to support Amina in Tunisia.

Tunis, April 2nd, 2013 – GoTopless, an international organization that promotes gender equality and that advocates women's right to go topless wherever this right is granted to men, firmly denounces the comments made by Tunisian Salafist preacher, Alami Adel, leader of the so-called Committee for the Promotion of Virtue and the Prevention of Vice, who called for Tunisian citizen Amina to be "stoned" “quarantined,” and to “receive 100 lashes” because she posted a top-free photo of herself on Facebook.

“Mr. Adel’s comments are appalling from the standpoint of their violent overtone and also because they scoff at the notion of equal rights between men and women in Tunisia,” declared Joce Blottière – GoTopless spokesperson in the Middle East. “How can Mr. Adel condemn Amina’s action with such vitriol when thousands of photographs of shirtless Tunisian men are posted every day on Facebook without anyone raising an eyebrow or being offended?”

GoTopless advocates total gender equality and rejects any oppressive and one-sided machismo statements that allege to promote virtue and prevent vice. The activist organization, “GoTopless,” was launched by Rael – spiritual leader of the Raelian Religion (www.rael.org) – and its values are in perfect harmony with the Human Rights Charter, which explicitly includes equal rights between men and women.

“History tells us that it is the repression of nudity that causes mental imbalance and that leads to violence against women, not the other way around. In fact, in many African and South American tribes, where women have a propensity to walk around bare-chested, there are no irrational reactions from men or sanctions against women. And the same argument holds true when it comes to the majority of Mediterranean beaches,” expressed Blottière. “This sexual violence toward women is present in the most repressed countries, such as India for example, where collective rapes make the newspapers’ front page!”

GoTopless encourages all Tunisian women to make their right to go bare-chested known in the same way this right exists for all men, and to make their voices heard by not subjecting themselves to any law that would consider them unequal or inferior to men, whether on issues related to their bodies or others.

Blottiere concludes: “The love for freedom seems to be viewed by Muslim extremists as the most serious psychiatric disease there is, one that requires a radical and forceful treatment similar to a punitive fascist medicine. And GoTopless is firmly opposed to this.”

GoTopless will join “Femen’s Topless Jihad” action on Thursday, April 4th to support Amina and will invite its members to organize topless demonstrations in front of Tunisian embassies around the world.