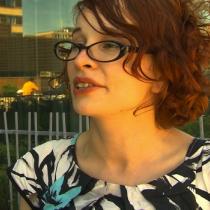 Back
Tweet
MONTREAL, August 8 - "If men have a right to go topless on beaches, women should have the same right."

With these words, Rebecca Anne Clark filed a complaint with the Human Rights Commission of Quebec. In that complaint, she said she was humiliated last week by a City of Montreal lifeguard who asked her to cover her bare breasts.

In a statement released today by the organization GoTopless-Canada, Sylvie Chabot, spokeswoman for GoTopless, said that at the time of the incident, Clark was enjoying an outing at the Cap St-Jacques beach with her boyfriend.

"She simply removed the top of her swimsuit," Chabot explained. "She thought it was no problem to go topless on Quebec's beaches, but the lifeguard was filled with prejudice, and she offended Ms. Clark by forcing her to cover up on top without asking her partner to do the same. Therefore, this is a case of pure discrimination against women, and it should be denounced loudly."

Chabot said GoTopless was founded in 2007 and that its mission is to obtain for women the right to go topless legally wherever that right is granted to men. GoTopless events are held annually in over 40 cities around the world.

"If the right to go topless is not equal for both sexes, then men should cover their tops too," Chabot said. "We need to remember that in 1996, after a legal battle led by Gwen Jacob, the Court of Appeal for Ontario officially legalized the right for women to be topless on beaches and in parks across the province. That's why GoTopless demonstrated in Toronto streets in 2011 to change that city's municipal rule against female toplessless. It was in direct conflict with the provincial legislation. We were successful in getting the municipal rule eliminated. Since last summer, it has been legal for women to go topless on Toronto beaches."
GoTopless wants to see the same kind of change in Quebec.

"Although our organization hasn't been very active in Quebec before this, it's time to protest there!" Chabot said. "There
should be more women like Miss Clark, who is bravely defending her rights, and she can count on our support."

She said the authorities should devote their time and energy to enforcing legislation against harmful acts such as sexual violence and having sex with children because as attorney Julius Grey remarks, these serious, degrading acts are what the Supreme Court defines as obscenity but certainly not women baring their chest in public!

"Persecuting women like Ms. Clark for going without a top where men already can is discriminatory and wrong," Chabot said. "There is no shame about the human body, whether male or female, and it's time to change any law that says otherwise."