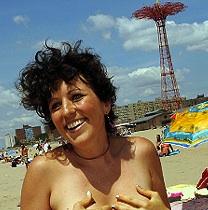 Back
Tweet
LAS VEGAS, Aug. 9 – As GoTopless activist Phoenix Feeley enters Day 5 of her hunger strike at the Monmouth County Jail, she and her supporters are vowing to continue protesting what they call "the discriminatory topless laws in New Jersey."

Nadine Gary, spokesperson for GoTopless, a national women's organization devoted to achieving equal topless rights for women, says Feeley has been transferred from her cell to the jail's infirmary.

"In spite of her diminished physical condition, she has continued with her refusal to pay the discriminatory court fines she was assessed during her court hearing," Gary said. "She was ordered by Municipal Judge Pappas to spend 16 days in jail."

Gary said GoTopless activists in New Jersey are protesting Feeley's incarceration and will picket the Monmouth County Jail on Saturday from 9 a.m. until noon.

"Ironically, Judge Pappas is the same judge who originally ruled against Phoenix Feeley for going topless at Spring Lake beach back in 2008," Gary said. "At the time, he declared vehemently that there would be no women going publicly topless in what he called 'his town'! That remark was of course in full violation of the Equal Protection Clause of the 14th Amendment of the U.S. Constitution."

Gary went to explain that Feeley's fight to achieve topless rights for herself and other women is strictly a matter of gender equality.

"Since New Jersey men are allowed to go topless in public, then, constitutionally, so must women; or else, as spiritual leader Rael, founder of GoTopless noted, men must be also forced to wear something to hide their chests."

Gary emphasized that for authorities and politicians like Congressman Pallone to use terms like "indecency" and "people's moral sensibilities" to suppress women's topless rights is unconstitutional.

"The New Jersey case of Gallagher vs. City of Bayonne showed that the New Jersey courts have repeatedly rejected attempts to enforce discriminatory statutes based solely on so-called 'moral sensibilities,'" she said. "The Equal Protection Clause of the 14th Amendment obviously applies to gender equality, just as it did when women sought the right to vote in 1920."

She pointed out that before the 19th amendment was passed, it was considered "indecent" for women to even want to vote.

"Alice Paul, a woman born in New Jersey, dedicated her life to securing equal rights for women and obtaining their right to vote," Gary said. "Today, Phoenix Feeley is dedicating her life to a different aspect of equal rights: topless rights."

"Suffragette activists, like Phoenix Feeley and other topless activists today, willingly went to jail for claiming their rights. That's why our annual GoTopless Day protests have been held for the last 6 years on or near Aug 26, Women's Equality Day. This year, GoTopless Day will fall on August 25 in more than 40 cities across the United States and around the world."

Gary said that in order to abide by the 14th Amendment, a number of states, such as New York in 1992 (as a result of The People vs. Santorelli), have already granted women the legal right to go publicly topless.

"New Jersey, along with all other U.S. states, is obligated to do the same," she said."And since the N.J. Supreme Court has refused to hear Ms. Feeley's case, her only recourse is to appeal to the U.S. Supreme Court so it can rule on this basic gender equality matter. GoTopless is watching this case very closely, and we're determined to see that equal topless rights for women become guaranteed by federal law."