Today, with new advances in neurosciences, we can clearly map every part of the brain, showing how every inch of the body is intrinsically connected to neurons in the mind. Science points to the fact that the body and the brain are actually one: an undivided, indivisible entity. So what happens to individuals' brains when society imposes indecency laws upon them, shaming and banning some of their body parts in public?

That is what GoTopless is trying to determine by examining cases of women and girls whose breasts and nipples have been criminalized.

With that in mind, GoTopless interviewed Dr. Marcus Wenner, a neuroscientist in the United Kingdom and a teacher of the meditation practice called Sensual Meditation, which was developed by spiritual leader Rael who inspired the foundation of GoTopless in 2007.

Part 1 of the interview that follows addresses how current indecency laws (anti-topless laws) harm brain pathways in women and girls. Part 2 offers techniques from Sensual Meditation to heal brains that have been adversely affected by shame and guilt. 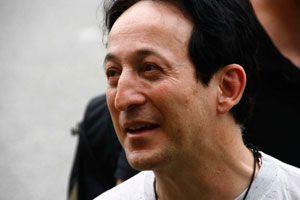 What happens in female brains when so-called “laws of indecency”, such as anti-topless laws, are imposed on women and girls?

Yes, as you mentioned, every part of our body is connected to a part of our brain via nerve pathways, peptides and hormones. Everyone knows, for example, that if you touch your little toe there is a part of the brain corresponding to that little toe that lights up. But what people don’t realize is that just thinking of that little toe also lights up that brain part. And what’s more, the way we think about that toe affects that brain part too. So the way we view our body has a direct impact on our brain.

Studies show that if you cover your eyes for a certain amount of time, the neurons in the visual cortex will begin to atrophy because they’re not being used and you will slowly go blind. Every brain circuit needs to be stimulated or it will die, especially in the young. Use it or lose it. The brain is very efficient at getting rid of unused brain circuits, and it’s the same when not using other parts of the body, or when not using other senses, such as hearing, smell, touch, etc. And it’s also the same when liking or disliking a part of one’s body, or feeling shame or guilt about it.

You see, there are parts of our brain which are active in maintaining our sense of self, telling us, “This is my body,” so the act of denying a part of our body is a bit like disinheriting a member of our family. It also takes energy to maintain the separation, since brain circuits are mobilized to stop thinking of the denied part as a valid part of the self. That is too wasteful for the efficient brain, so it ends up just killing those circuits.

And when we are taught to feel guilty about exposing our breasts, we are not only killing the part of the brain connected to and representing our breasts, but experience a detrimental rebound effect on the breasts themselves. That’s because the breasts need to be maintained by the brain.

Humans are designed to enjoy expressing themselves in many ways: in the way we speak to others, expressing our emotions; in the way we act, such as helping other people; in singing, cooking, dancing, and of course in simply being beautiful. To prevent someone from expressing their natural beauty is just like preventing them from expressing their emotions. It’s like repressing freedom of speech. All sorts of mental imbalances occur when we repress our emotions, and all sorts of mental imbalances also occur when we repress parts of our bodies.

In the case of anti-gotopless laws, which today are inflicted solely on women, the problem is compounded, since the female brain also perceives this as unfair treatment to her gender. To compensate for this paradoxical command, which goes against one’s person, the brain goes into rationalization mode: "I’m a good girl if I cover my breasts. Therefore, any girl who doesn’t obey this rule must be bad, and she is therefore a whore.”

Research shows that the more effort we put into repressing a natural part of ourselves, such as refraining from freely exposing one’s breasts, the more anger and aggression we will have when we see someone else disobeying our rules. The people most vocal against freedom are those who are most hung up about it: they would really like to do it themselves but cannot allow themselves.

How can the GoTopless campaign bring change to the female mindset?

Teaching little girls, such as the 8-year-old girl at a swimming pool in Gwelph, Ontario, a few weeks ago, that they should cover up their breasts is actually damaging their brains. It paralyzes and kills off certain brain circuits, which is definitely child abuse. And if you think about it, it amounts to a form of lobotomy. Fortunately, the brain is fairly plastic, so with time it can be restructured. GoTopless campaigns can help with this healing of the brain.

Since undoing the wiring dictated by indecency laws is a neurological process, it can be accomplished by exposing someone to the stimuli that was once taboo, but this should be done only if that’s what she wants. Forcing a woman to be topless would have the same effect on the brain as forbidding her from doing it. Free choice is crucial for sound human development.

Some minds bounce back rather quickly; others take more time. And there’s a portion of the population that will never be able to completely embrace the previously alienated body parts. That group may continue to inflict guilt upon others as a coping mechanism. A good piece of advice for parents is to practice empowerment of all body parts at the youngest possible age. It’s much trickier to have to backtrack later; it isn’t easy to remove shame from the brain.

PART 2 of our interview with Dr. Marcus Wenner: Healing the brain from shame and guilt with Sensual Meditation

This news item is from GoTopless
( http://gotopless.org/news.php?extend.145 )