LOS ANGELES, August 23 – On August 28, the women’s rights organization GoTopless will hold Go Topless Pride Parades and other events in Los Angeles, New York and over 60 other cities worldwide for the 9th annual GoTopless Day, according to a statement released today by GoTopless.

She said the Los Angeles Pride Parade will begin at Navy St./Boardwalk with speeches about topless equality and the ERA and conclude on Windward Circle.

A year ago in April, Venice Neighborhood Council Community Officer Melissa Diner had sponsored a resolution that would allow women equal topless rights on Venice Beach. It was adopted by a 12-2 vote, but still requires county and city approval before it can go into effect. That could take time.

“The Venice Neighborhood Council’s approval is a hopeful step forward after our 9 years of activism on Venice Beach,” Charles said. Now it’s time for the city and county to follow up by making equal gender topless rights a priority!”

Meanwhile, she added, GoTopless is inviting both men and women to “stand up with topless pride” on Aug 28 to honor the 95th anniversary of Women’s Equality Day and to support the passage of the Equal Rights Amendment.

“Around the world, gender inequality over the centuries, including exclusively male leadership, caused imbalances that could destroy society,” Charles said. “Spiritual leader Maitreya Rael says society can be preserved only when there’s absolute equality between men and women.”

Enforcement of equal topless rights is a crucial aspect of gender equality, she explained. 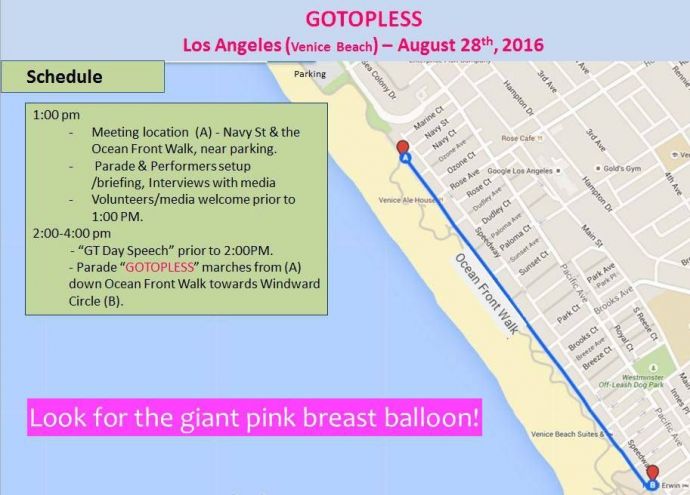 This news item is from GoTopless
( http://gotopless.org/news.php?extend.148 )