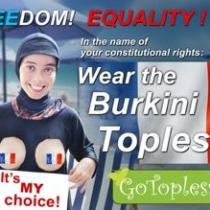 In response to the recent media storm caused by the banning of the Burkini on French beaches, the international organization GoTopless.org is launching a campaign "Wear a burkini - Topless ". However amongst all this noise, the French leaders and state institutions are keeping remarkable quiet on the subject of personal freedom and gender equality of the right to be topless.

"Equal rights for everyone, regardless of origin, condition, appearance, belief, sex or gender, includes the right to be topless, just as much as the right to wear a burkini "said Maryline Canin, GoTopless coordinator in France. "The freedom of dress is a fundamental right which must be respected, regardless of any political and religious considerations," she continues.

The campaign "Wear a burkini - Topless" was inspired by an idea from Rael, spiritual leader of the Raelian Movement who had already initiated the GoTopless Movement in 2007 and whose support for gender equality is uncompromising. He recently stated: "Muslims are being criticized because they force their women to wear a burqa, a niqab, or a burkini. Yet that is exactly the same sexist thinking forcing Western women to hide their breasts in public." He added that "the hypocritical politicians are claiming to do all they can to support equal rights for women, but so far no one has dared advocate for equal rights to be topless" (see Rael’s full speech.).

Regarding the French government, Maryline Canin says that GoTopless activists have been confronting each successive minister of women’s rights for several years on this issue without any response to date, and yet now the Prime Minister himself has just declared that Marianne’s bare breast is France’s symbol of freedom, that is to say one of its fundamental constitutional principles.

"In France, under the fuzzy pretext of decency and public order, we have been persuaded to relinquish our personal freedom at the expense of an authoritarian and discriminatory logic" says Maryline Canin.

While the mayors of Cannes, Le Touquet and other cities are banning the Burkini, in Paris on the other hand, equivalent authorities are trying to prevent women from going topless on beaches. Men on the other hand, can walk about topless without any problems. That is why we decided to bring this to the public’s attention through an open letter to Mr. Valls, the prime minister of France in the hope of resolving this discrimination (link to letter).

“The price of freedom today for every "French Marianne", that is to say any women choosing to be topless just like men, is a 15,000 euro fine and a year in prison for sexual exhibitionism" explains Maryline Canin. "Correct dress-code expected of women: not too covered and not too bare. That is the limit of “freedom and equality” rationed out by the archaic and sexist texts applied in France, all under the domination of  monotheistic thinking" she concluded.